Broccoli on the Menu in the Lockyer Valley

The paddock to plate movement was at its best last week in the Lockyer Valley after Qualipac handed over a box of fresh Queensland broccoli to Keith, chef at local restaurant Cafe 4342. Keith worked his magic and created three mouth watering dishes showcasing not only his skills but also the versatility of the humble broccoli. Chef Keith certainly has an appreciation for fresh local produce and it’s not hard to see why Cafe 4342 is one of our favourite Lockyer Valley restaurants. 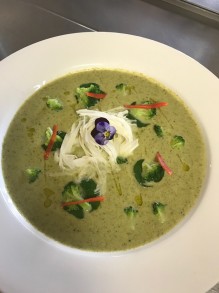 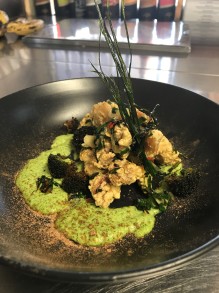 Crispy cuttlefish tossed with chilies and coriander on a creamy broccoli puree finished with fried broccoli, shallots and nori dust 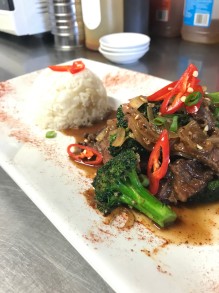 Beef and broccoli stir fry with oyster sauce and chilies

The prestigious award was accepted by Qualipac Director Troy Qualischefski in front of a capacity crowd at the Gatton Shire Hall.  In his acceptance speech, Troy acknowledged the businesses close connections to the Lockyer Valley region.

“The Lockyer Valley Region has provided a living for our family since the early 1900′s and we hope that this will continue for generations to come. It is a wonderful region to operate a business and we are very proud to receive this award tonight”.

Troy also took the opportunity to pay tribute to the wives and partners of the businesses key staff members and company directors.

“In a largely male dominated industry, the wives and partners and the role they play behind the scenes can often go unnoticed. They certainly are a big part of Qualipac’s success and we appreciate their support and the contributions they make to our business.”

The award capped off a remarkable night for the business after also taking out the top award in the Agricultural and Horticultural Production and Processing Business category.

Qualipac’s success at last night’s awards is a testament to the hard work and dedication of all members of the team and provides further motivation to continue to build and improve the business into the future. 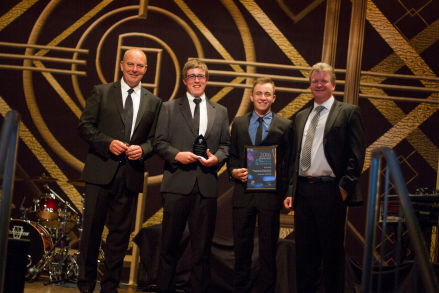 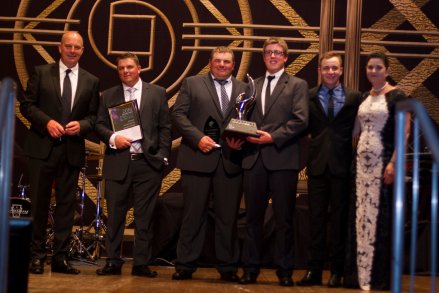 Deputy Premier on Board with Broccoli Export to Japan

Qualipac Director Troy Qualischefski and Sales and Marketing Manager Kees Versteeg spent yesterday morning in Toowoomba with Queensland Deputy Premier and Minister for Trade Jackie Trad. The meeting, organised through Trade and Investment Queensland, was an opportunity to showcase to the Deputy Premier the export side of the business and in particular, our Broccoli export to Japan.

Kees Versteeg has been heavily involved in developing this area of our business and sees the Japanese and Asian markets as a significant opportunity to sustainable and  long term export of fresh produce.

“We are currently sending (and growing) significant volumes of Broccoli to Japan and other Asian countries each and every week. As a grower and exporter we have and will continue to develop very strong relationships with our overseas customers to continue growing our export market. Growing as well as exporting our fresh produce has enabled us to significantly shorten up the whole of the supply chain so that we can deliver the freshest and best quality produce to our customers and consumers”.

Ms Trad was impressed with the achievements of Qualipac and is very optimistic about future opportunities to increase exports into Japan. You can read more about Ms Trad’s visit and the export of Broccoli to Japan here:  http://statements.qld.gov.au/…/darling-downs-leads-the-way-… 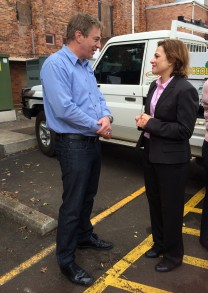 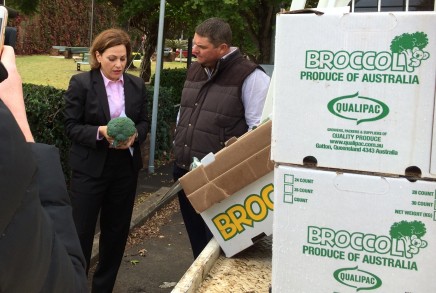 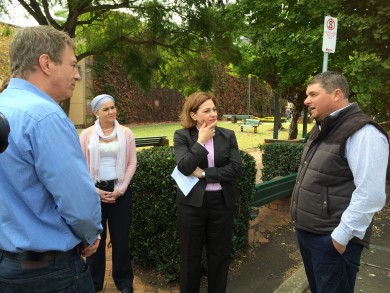 Harvesting of the beans is underway and we are now almost half way through the process for this season. The beans are part of our ongoing association with food manufacturer Simplot with the majority destined for frozen product.

Long time Qualipac employee Allan Harch has the task of harvesting the beans, a job that often begins at midnight due to the cooler temperature. Keeping the beans as cool as possible is important for preserving their freshness, especially in our climate and at this time of the year.

Qualipac Farms General Manager, Brad Qualischefski has been overseeing the process and is very happy with the results.

A lot of hard work goes into the growing stage and it is rewarding to get to the harvesting stage, especially when the results are as good as they are. The product quality is excellent and the yields have exceeded our expectations.

From the farm the beans are transported a short distance to our packing shed where with the support of Simplot, we have established a specialised bean line. The beans are washed, sorted and cooled before being transported by train to Simplot’s factory in Devonport, Tasmania where they will be processed and snap frozen.

As a proudly Australian company, Qualipac are pleased to be able to work with Simplot in their push  to see more Australian produce in frozen products in our supermarkets. 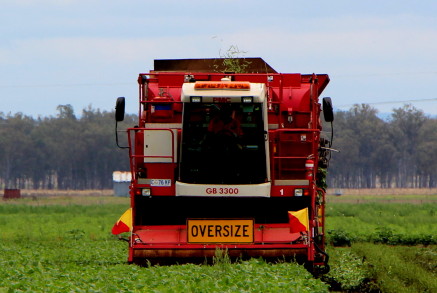 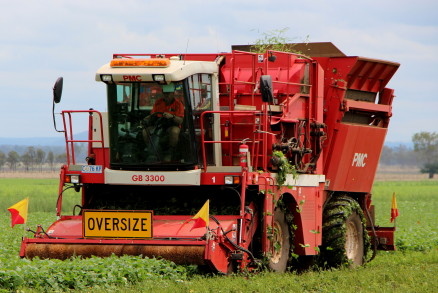 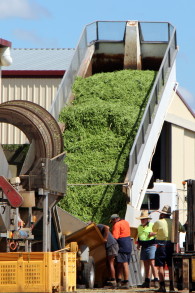 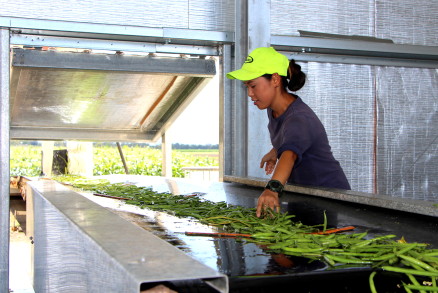 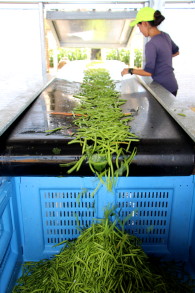 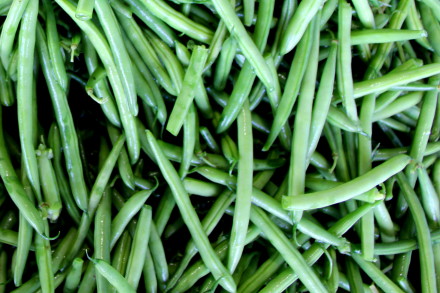 Beans and Cabbage on the Summer Menu

With just a few weeks to run on our broccoli season and with the warmer weather now upon us our attention turns to our summer production crops. This year, as well as corn we will for the first time be producing both beans and cabbage as part of our ongoing partnership with food manufacturer Simplot.

This summer, Qualipac will be producing over 3000 tonnes of corn, 500 tonnes of beans and 200 tonnes of cabbage which will be destined for a variety of Simplot products. We are currently half way through the planting stage with the majority of the produce being grown in the Lockyer Valley.

Simplot have a strong commitment to supplying our major supermarket chains with both canned and frozen vegetables sourced from Australian producers and Qualipac are proud to be able to continue our association with them.

It’s great to see the supermarkets supporting Australian growers through their business with  Simplot. A lot of the time the focus is on fresh Australian produce but it’s also good to see their commitment to Australian grown vegetables in canned and frozen products as well.

Harvesting of the products will commence in November and run through until Christmas. 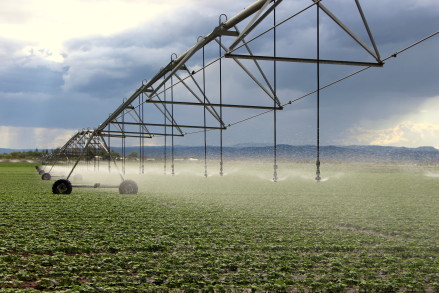 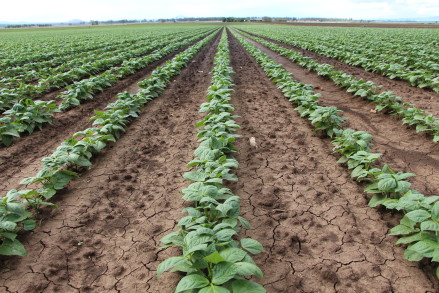 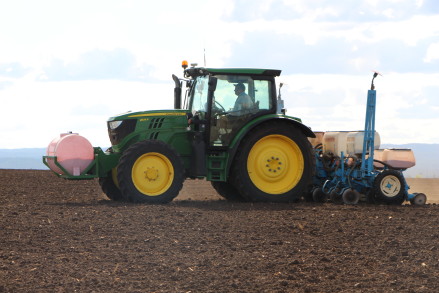 Qualipac’s Sales and Marketing Manager, Kees Versteeg was recently awarded the 2015 Innovative Marketing Award at the Ausveg Convention, Trade Show and Excellence Awards held on the Gold Coast in Queensland.

The award was received as recognition from his peers for many years of contribution and success in the industry.

Kees has been with Qualipac for over 5 years and has been instrumental in the continual development of our business  and we congratulate him on this well deserved award. 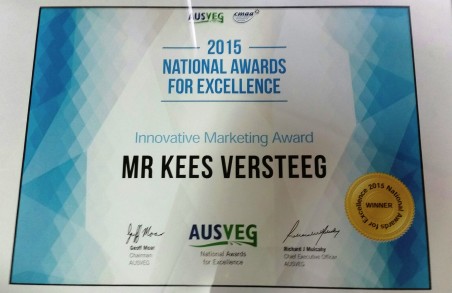 Today, Qualipac was proud to support the opening of Woolworths new store at Maroochydore on the Sunshine Coast in Queensland.  A fantastic display of Qualipac’s broccoli was set up at the store at a red hot price of $1.48/kg.  Qualipac Director Troy Qualischefski and Sales Manager Kees Versteeg were both in attendance at today’s launch and were thrilled with the broccoli display.

“The broccoli looked perfect and we are very pleased to be able to supply fresh Lockyer Valley produce to the Sunshine Coast. Were pretty sure that at this price and with the quality so high there will be plenty of Sunshine Coast residents enjoying broccoli for dinner this week.” Troy Qualischefski, Qualipac Director 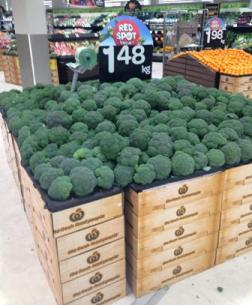 We are almost half way through our 2015 season with both volumes and quality high. Harvesting is now complete on the Darling Downs and we are currently harvesting in the Lockyer Valley. 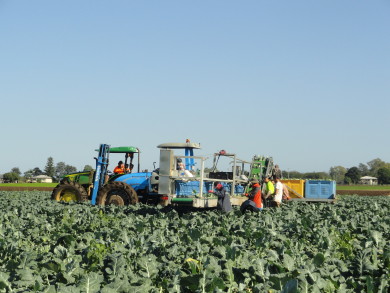 Harvesting Broccoli in the Lockyer Valley 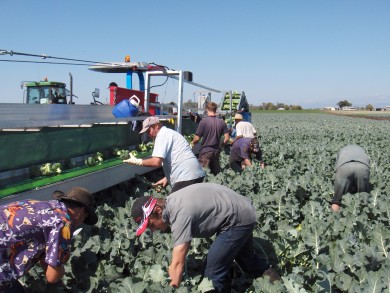 Getting Back Into Broc

Preparations for our 2015 broccoli season have begun with planting of both broccoli and baby broccoli well underway.  After initially starting at the end of January on the Darling Downs, planting has now moved to the Lockyer Valley where we will continue until the end of June.

“Everything has been going very smoothly and the recent rain has definitely been helpful.”

Harvesting will begin in the first week of April and will continue all the way through the mid October. We are aiming to harvest 120,000kgs of broccoli and 6000kgs of baby broccoli a week which will be sold to local, interstate and international markets. 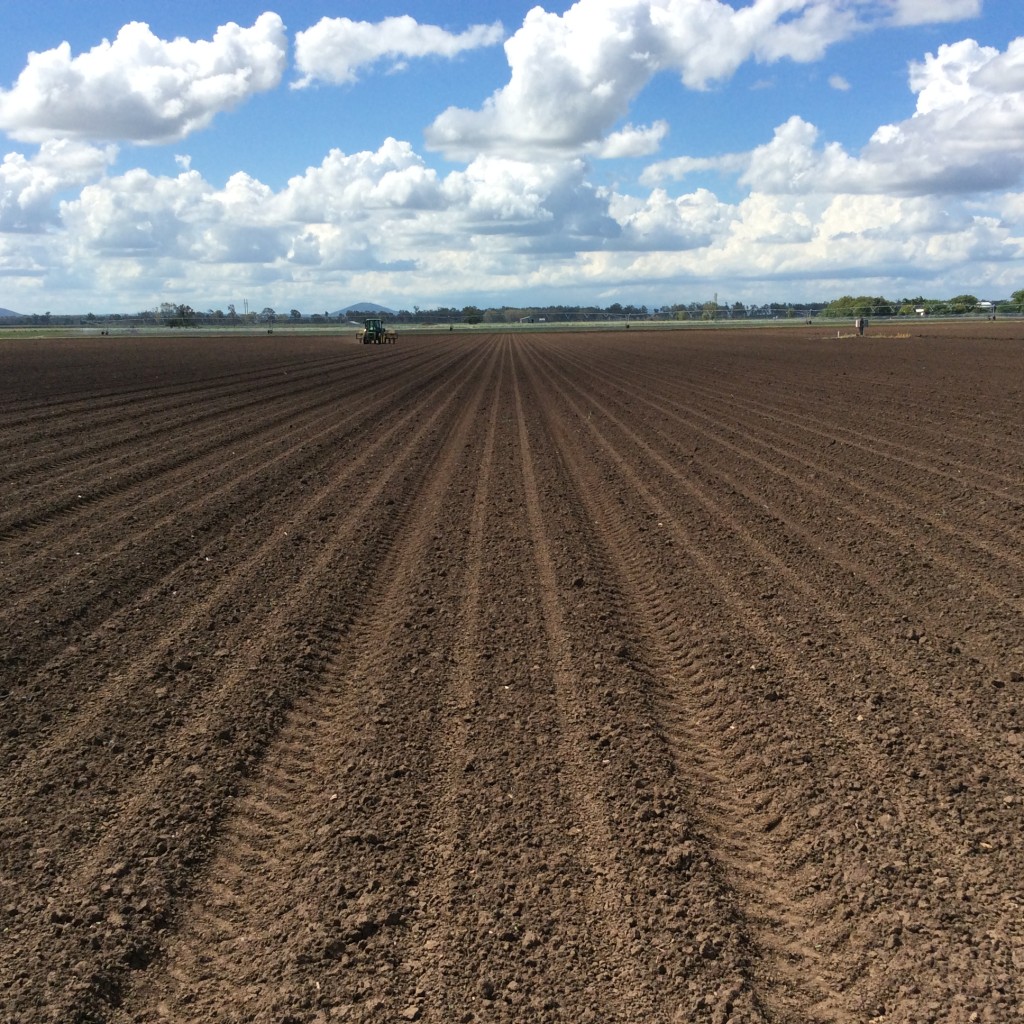 Broccoli is grown from seed and has just been planted here 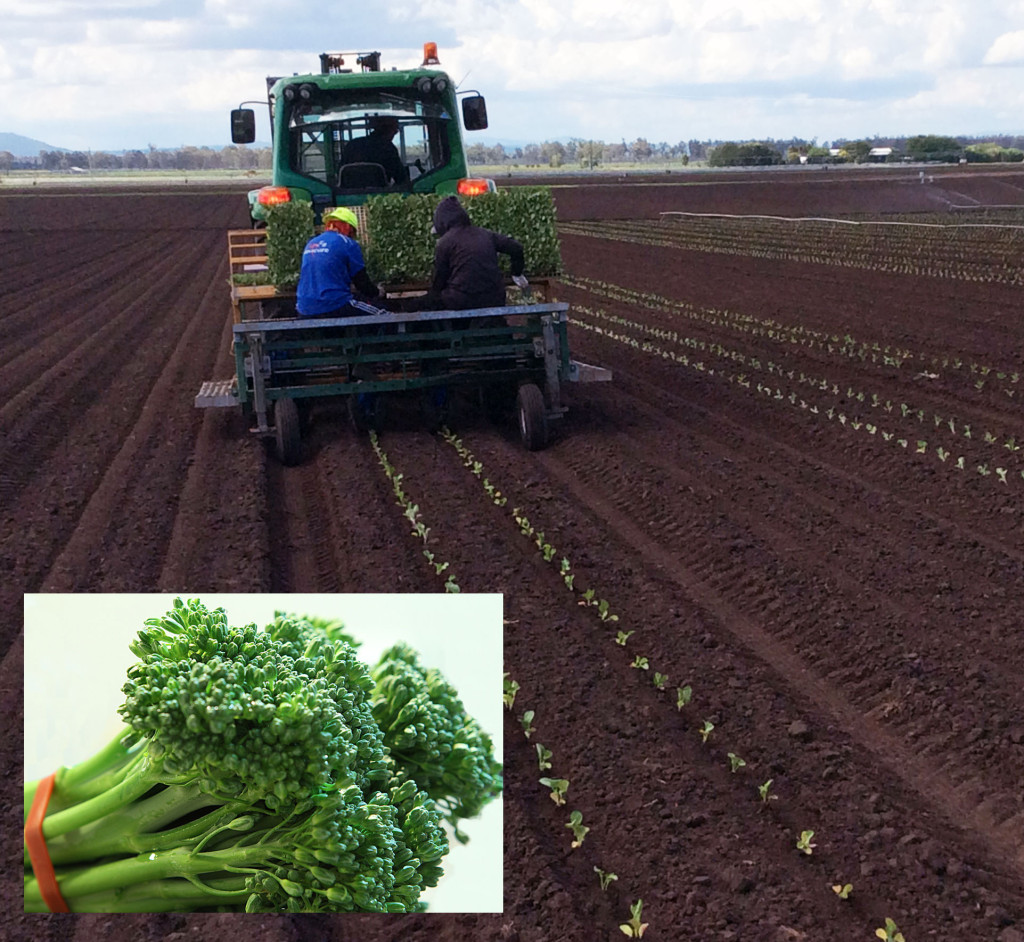 Planting baby broccoli which is grown from transplants

We have just wrapped up another successful corn harvest with 3500 tonnes of corn harvested from our farms in the Lockyer Valley just before the end of the year. The harvest marks our fourth year of partnering with food manufacturer Simplot. For Qualipac Farms General Manager Brad Qualischefski it has been a challenging crop.

“The conditions have been pretty tough this year with hot and dry weather presenting us with some challenges and ironically, when it came time to harvest it was quiet wet. Having said all of this, we were very happy with the end result.”

While corn is not one of our major crops in terms of production it is important for crop rotation. The crop fits in perfectly between out other crops and the tops of the plant left behind after harvest are excellent for the health of the soil. So where did the corn end up? If you have enjoyed some Edgells canned corn or Birds Eye frozen corn lately, there is a good chance it was grown by Qualipac. 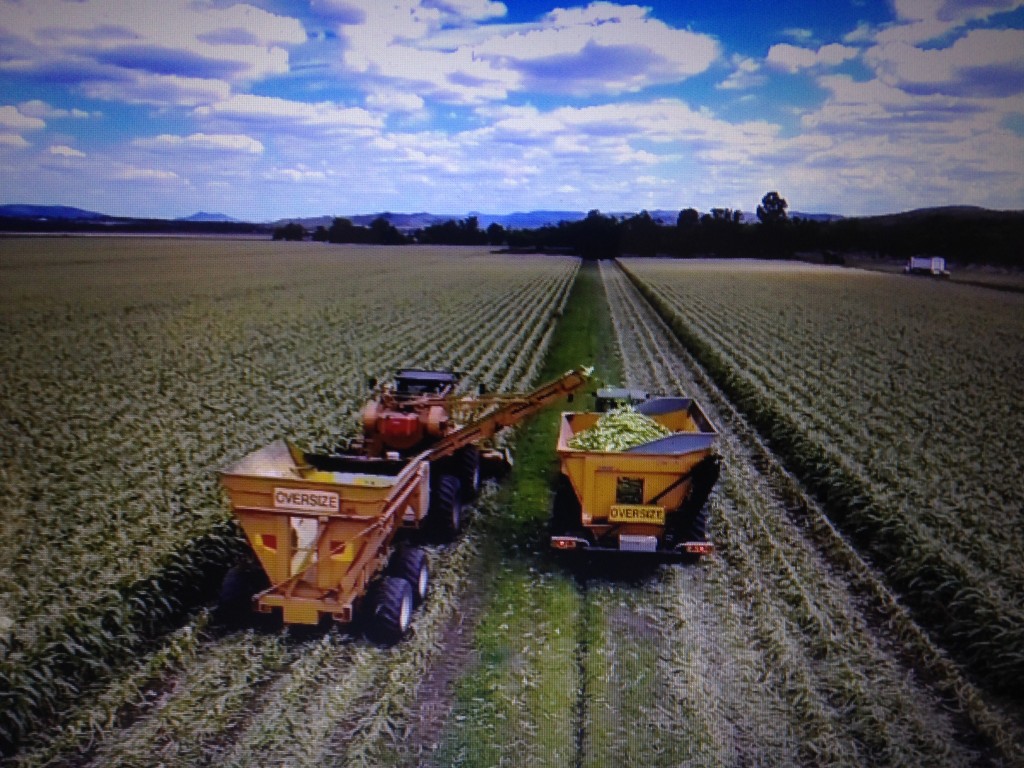 Qualipac has been awarded the 2014 Mayors Award at the Lockyer Valley Business, Training and Apprenticeship Awards which were held over the weekend. Presented by the Mayor Cr Steve Jones and event host Andrew Daddo, the award is in recognition of outstanding performance by a business in the region. Qualipac co-owner and director Troy Qualischefski attended the awards night and received the award on behalf of the management and staff at Qualipac.

“We weren’t aware we were receiving the award so it was a nice surprise. It is great to be recognized, especially by the Mayor and within the local community.  It certainly motivates us to keep working hard.” 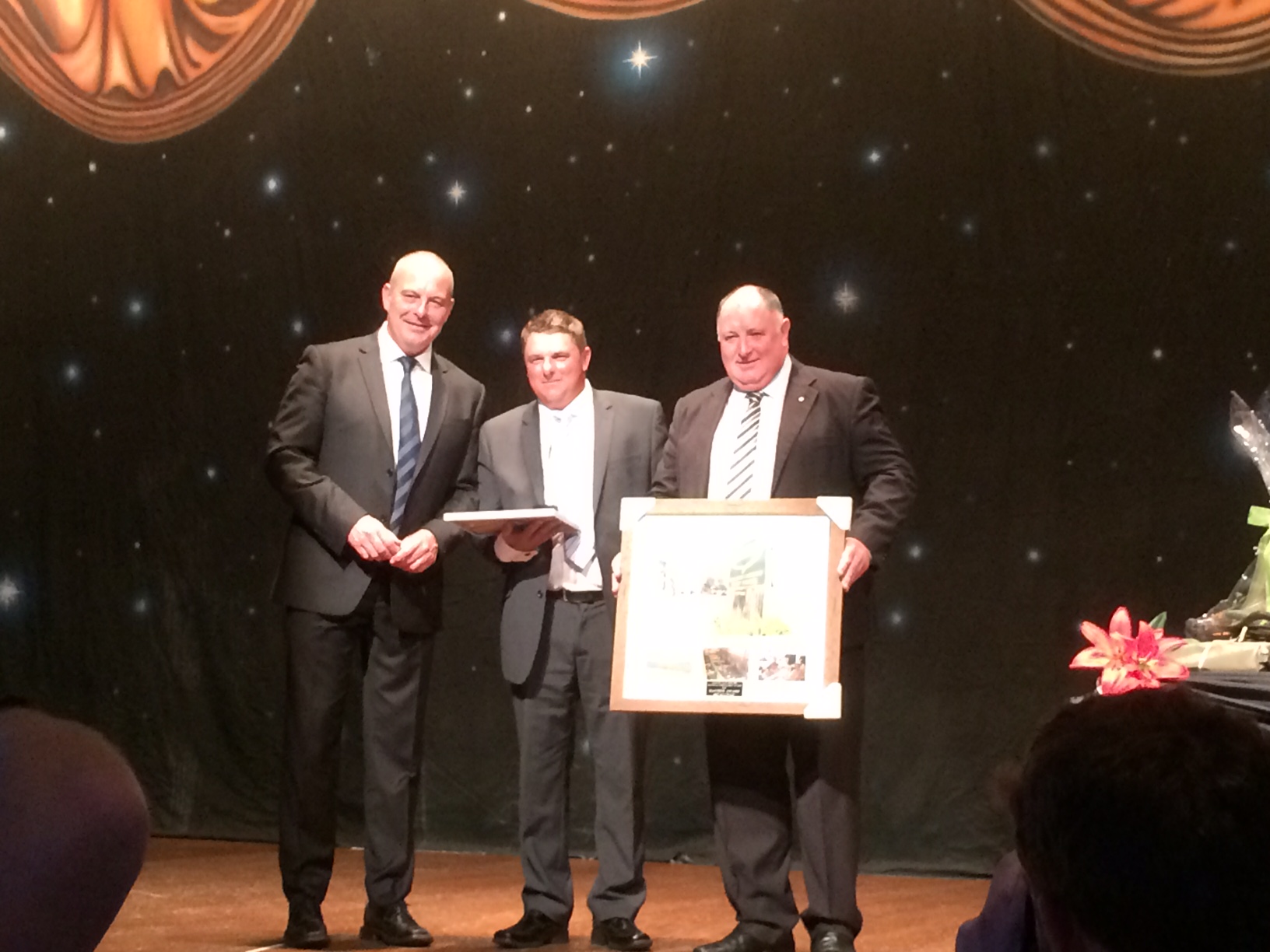 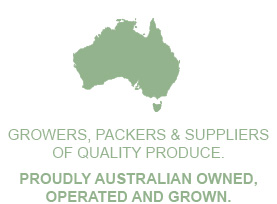